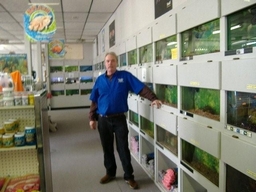 The ideal client relationship for a SCORE counselor is one in which the small business client accepts the counselor as a long-term mentor and they work closely together on problems and opportunities as they arise. For any number of reasons this ideal is not often realized.  Even rarer is achieving this ideal in a long distance email/telephone relationship.  But it happened big-time between 15-year Dayton SCORE counselor, Gordon Callihan, and Jasper Indiana pet store owner, Eric Majors.

Eight years ago Eric chose Gordon to ask for help via the SCORE online counseling system.  Eric′s first note was dramatic: "Please, sir, can you help me save my business?" Gordon responded asking for extensive information (financials, competitive situation, employees, facility, parking, marketing, etc.) which Eric willingly provided. They identified and attacked three initial key issues: attracting customers, hiring and keeping good employees, and achieving personal happiness. In those early months, Gordon and Eric communicated frequently, often twice a day. When they began to look closely at margins, inventory turnover and other issues, it became clear that they needed to focus on basic retailing principles. Step by step, Gordon coached Eric on how to purchase better and demand lower delivered prices from suppliers by buying closeouts, ordering larger quantities, and the like.

Eric′s business, Seven Seas Pet Store, carries an extensive selection of aquatics products, including aquariums, ponds, and tropical fish. It also offers food, treats, toys, grooming products, training supplies and more for cats, dogs and small pets. After a couple of years of mentoring, Gordon introduced Eric to the concept of departmentalizing the store.  They defined 14 departments, considering each department as a profit center, taking inventory by department, bringing goods into the store by department, and keeping a P&L for each department, charging each a portion of the store′s fixed costs on the basis of the space used. Margin and profit goals were set for each department, and management decisions were made based on departmental performance.

At Gordon′s suggestion, Eric purchased a point of sale system that allowed him to track inventory by stock keeping unit for even better control. Year by year, the pet store became more profitable. Gordon then encouraged Eric to think in terms of defense. What would he do if one of the large pet store franchisors decided to place a franchise in his territory? They also studied the strategy of opening a second store in an adjacent area, but rejected it based on the financial analysis. They researched employee incentives, considered employee specialization, and other ideas. When they finished a study they documented the analysis and their decision.

In the last couple of years, Eric′s store has done very well, but Gordon and Eric continue to communicate frequently to discuss the business.  While they have never stood face-to-face, Gordon stresses that their relationship is more than counselor/client, they are close friends.  This is a tribute to both parties:  Gordon is a skilled counselor with extensive retail and management experience from his career with the NCR Corporation where he was a top flight salesman and sales manager in the cash register industry, and a sales trainer for the company throughout the world; and Eric is an excellent client who trusted Gordon and followed through on all of Gordon′s recommendations.  Productive long-term mentoring via email and telephone communication is clearly more difficult than face-to-face, but they made it work.

Eric tells it this way:  "When I first contacted Gordon, I had had my business for about 20 years, but I thought I was going to lose it.  After exchanging several emails with him he told me that I was "flying blind without a license", and he was right.  Over literally hundreds of emails, he told me exactly what to do, and I did it, and it worked.  My business is thriving and I owe it to him.  This spring I am going to travel to Dayton and give my friend a big hug."